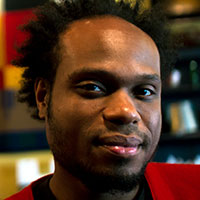 Jamaal May is a poet and editor from Detroit, Michigan where he has taught poetry in public schools and worked as a freelance audio engineer and touring performer. His first full-length collection, Hum (Alice James Books, 2013), received the Beatrice Hawley Award and an NAACP Image Award nomination. Other honors include the 2013 Indiana Review Poetry Prize and a 2011-2013 Stadler Fellowship. Jamaal’s poems appear in such publications as The New Republic, The Believer, Poetry, Ploughshares, Poetry Daily and Best American Poetry. He co-edits the Organic Weapon Arts Chapbook and Video Series with Tarfia Faizullah. 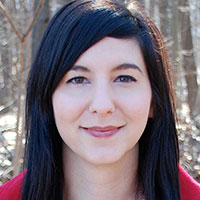 Melinda Moustakis was born in Fairbanks, Alaska and raised in California. She received her MA from UC Davis and her PhD from Western Michigan University. Her book, Bear Down Bear North: Alaska Stories, won the Flannery O’Connor Award and the Maurice prize and was a 5 Under 35 selection by the National Book Foundation. Her work has appeared in Alaska Quarterly Review, American Short Fiction, The Kenyon Review, and elsewhere. She was a Hodder Fellow at Princeton University and received a 2014 NEA Literature Fellowship in Fiction. Her story, “They Find the Drowned,” won a 2013 PEN/O. Henry Prize.